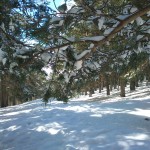 Buses have always been an option inSpain. Europein general excels at this form of transport and still does.  Sure they occasionally tumble off cliffs or plunge into lakes, and sure a weary driver might fall asleep at the wheel from time to time, causing dozens of victims to be tossed around in the interior like fleshy toys in a box.  But on the whole, when bodies aren’t being mangled, they really are a solid way of getting around the country, and measurably more pleasant when compared their American counterparts.  That’s the country where people say, “You came by what?  Did you just get out of jail or something like that?”

Spaniards who have been toAmericaand, now here’s the real factor, have actually sat their buns down on one for any extended period of time, can personally vouch for this.  They know what I mean.  Every time I take a group over to the States, the minute they see the bus waiting to pick them up at the airport, the gawk, “What the hell is that?”  But they do want to get on because deep down I know they are aching to find something which is technologically inferior to what they have and they are absolutely right.

And that’s because Europe is entirely different.  They take their bus travel seriously.  The autocares are capacious, comfortable, smooth and sleek.  And they take you to a lot of places a train or plane can’t.  There is just one thing, I can’t stand them.  I really can’t.  Oh, I know if I have to travel that way, I will get to where I want with relative ease and style, and that there exist worse modes, but they just aren’t my thing.  No matter how much has been done to ensure comfort, they just plain seem poorly designed to me, and they are only really useful if you are interested in discovering where all the muscles in your body are.  After a few hours, each strand lets you know its location and how it is feeling at the moment, which generally ranges from dreadful to deathly.

On top of that, bus trajectories tend to highlight local tourism and ensure success by stopping in every goddamn town the region has available.  And, as luck would have it, someone always has to be picked up at one those places.  The traveler straggles out of the bar where he has purchased his ticket and hoists his body onto the vehicle, where he scans the aisle for a free seat. Then the bus, hisses, the engines grumbles and grinds, and the whole ten tons begin to roll away.

They run through the same procedure twenty-five times on a trip, so at night, the notion of getting rest is something the non-passengers in the country will get plenty of on your behalf. The awful movie selection tends to do the rest.

I can stand maybe two or three hours of them, but then I just want to start being nasty to people beyond that point; and I can assure you that I act indiscriminately.  Back in the 1980s, I had little say in the matter.  Buses were cheap and so was I.  But it soon became apparent to me that, being an American and thus born with wheels, I would need to get my hands on a car.