December 31st isn’t just about raising a glass of cheer to the New Year, nor does it have only to do with wolfing down twelve grapes at midnight, though both stand out in participation and zeal.  In many parts of Spain, and in Madrid in particular, it means locking on your running shoes and bounding ten kilometers down the Castellana of Madrid all the way to Vallecas.  This is known as the Carrera de San Silvestre, and it also is the biggest street race of Brazil, I take it.

This fun run is just the kind of social gathering the Spanish love.  It’s also packed with feel-good benefits, like getting in a little exercise before the excesses of the night that looms, or burning off a few hundred of those calories that have colonized in your body over the past few days.  The sad news is that we are only halfway through the Twelve Days of Christmas, but I guess every little bit helps.

Saint Sylvester I was one of the first popes and it was under his papacy that the original Saint Peter’s Basilica was built.  Not much is known about him, and what is available is highly debated, so we’ll center on his death, which was not a tortuous martyrdom as was so common back then, but seemingly natural causes.  The day was December 31st, he missed out on that year’s festivities, but did leave the legacy for long-distance runners centuries down the road, if you’ll excuse the pun.  Certainly this was not part the design, but history has a funny way of working that way.

I have yet to take part in the old San Silvestre, though if only to free myself from the incessant Whatsapp  New Year greetings piling up on my cell, it wouldn’t have been a bad idea.  I will make it one of my objectives for next year.  There you have it, my first proposition.  A good choice.  I have eleven and half free months before I have to get working on it. 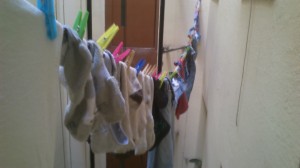