The first major procession took place last night in the heart of Madrid, in a street called Calle del Carmen which starts at the Puerta del Sol and runs up to Callao.

The procession is known as “Los Gitanos” (The Gypsies) and leaves from the Church of El Carmen.  When I arrived at 9:00p.m., a half hour before it was supposed to start, there was talk that it might even be cancelled altogether due to the rain.  It had stopped raining a couple of hours before, but the threat was ever-present.  Finally around 9:45 things got going.  Processions can be tortuously slow in getting moving, but the reason becomes evident once you see the floats emerging from the churches.  It is painstakingly process.  The floats are known as “Pasos”, and unlike in the States where they are motorized, these scenes or images of the final days of Christ are carried by manpower.  And they are very, very heavy.

Each paso is cared for by a fraternity known as a cofradías or hermandad.  Its members are the ones in charge of toting the massive float around the town.  Forming a part of the team is not a punishment but rather a great honor, often passed down from one generation to the next.  Members immediately sign their newborns up so that they will have a chance to participate years later.  Kind of like reserving season’s tickets to Packers’ games, or opening a college tuition account.

There is more than just the floats.  Here’s a quick look at the line-up last night: 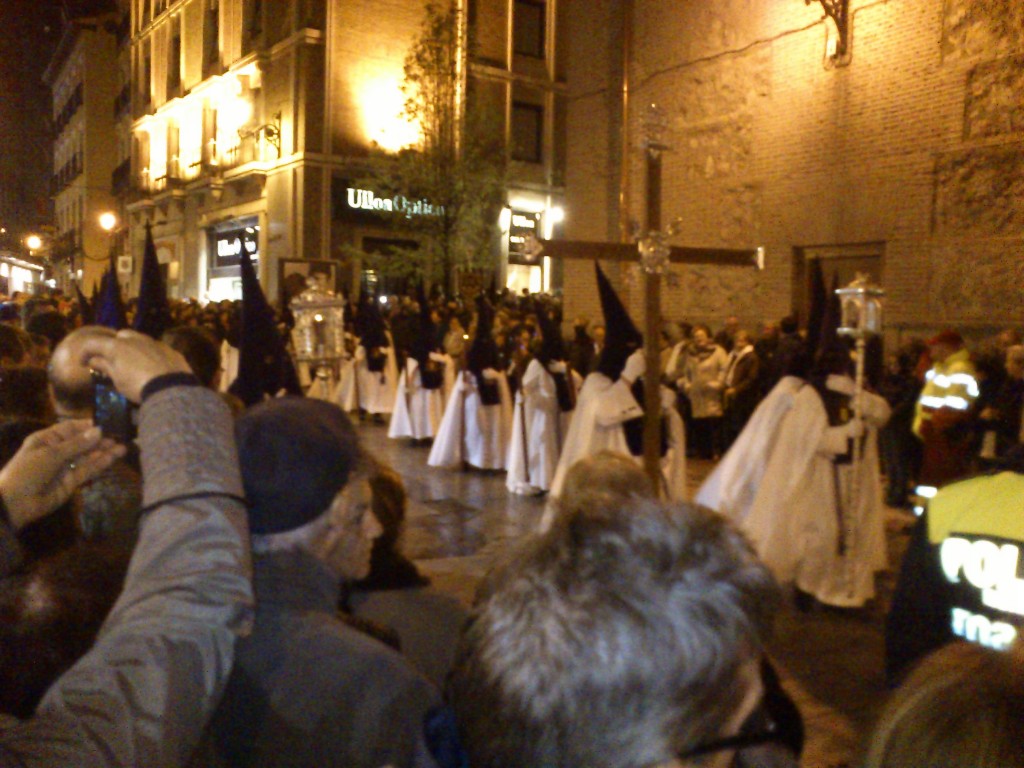 2.  One big float.  This was a beautifully hand-crafted wooden base with curly wooden candle holders and upon which was a large image of Christ bearing the cross.  The float was about the size of a Hummer and seemed to weigh as much too.  The bearers were supporting the weight from inside to give it a true floating appearance.    Here’s a three second video.  MOV_0110 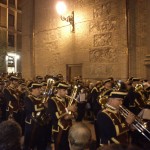 4.   A group of penitents with droopy hoods.  They dragged their own crosses.  Some went barefoot, which is a bold, if not foolish, thing to do in the middle of Madrid. 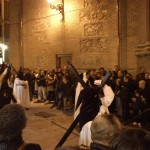 5.   Another group of penitents from a second fraternity.  These guys look a little creepier. 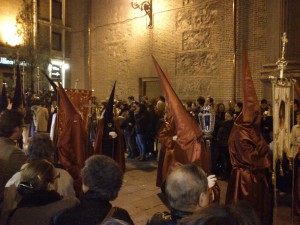 6.  A second “paso” or float of the Virgin Mary.  This one was all white, seemed a little shorter but was much taller as a four-posted canopy covered the imaged.  The bearers were also beneath and hidden from view by a draping curtain, so to speak. 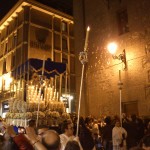 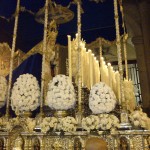 7.   A second band to give support to the second team of carriers. (No pictures thank God.  I don’t think I’ll be doing this again. It took me an hour to set up.)

All of Spain’s most emblematic elements could be found: priests, the guardia civil, the national anthem.  More than a spiritual event, it seemed like a gathering of all that tradition Spain held sacred.

The scheduled route was to weave through much of the old town, but the actual path was far shorter.  The processioners slowly paraded down to the Puerta del Sol, turned around and headed up the Calle Preciados, which is parallel to the Calle del Carmen, and then turned back towards the church.  In real time, this walk could be completed in ten minutes max.  After frequent breaks to relieve the backs and shoulders of the bearers, the process took well over two hours from beginning to end.  I can’t imagine their trying to do the whole route.  Maybe the threat of rain was a factor.