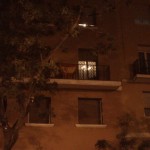 If you look at the balcony of the building, just any ordinary building in this city, you will spot an unusual sight.  Part of this has to do with my poor photographyship, but also part of the blame can be placed on my mobile phone’s flash, which is about the size of Smint candy.  Even though the camera itself is not bad, the lack of proper lighting makes night shots look about as crappy as this one.  But it served me well, because just as it is a task for you to discern the elements of the Spanish flag in the center of the picture, so is it equally a challenge to find that kind of banner in the center of the country, let alone other parts of the country where strong independent movements are taking greater hold. Here, the absence of national symbols is even more notable since the day I took the gem, last October 12th, Spain was celebrating its “National Holiday”.  No one in Madrid calls it that, it goes by the Puente de Pilar, and there are about half a dozen other names for the day.  Inexplicably, reference to Columbus is all but nonexistent.

The point is, though, and I think my artistic eye has succinctly captured that, is that pride in Spain as a unified sovereign nation is waning a bit these days.  In Madrid most Spaniards are naturally pro-Spain.  They just don’t go for the flag thing.  Some because it still reminds them of Franco, or so I am told.  Or so I am told.

The Spanish flag is a symbol of Spain.  Within Spain, it is a symbol of many facets of this nation.  Perched up on the iron rail of balcony in that nameless building on a tired Saturday evening, it is a symbol of loneliness and of being alone in that loneliness, like when you stop to think about how large the universe in comparison to your cell phone camera flash.

My daughter told me it was time to go home.  “It’s just a flag, Dad.  And in a ridiculous spot.”