So over the years Halloween has crept its way into Spanish society like a green ooze, and now that stores realize they can cash in on the day too, it is present in some of the most unsuspecting shapes and forms: Halloween girdles, pumpkin soap dishes, skeleton sunglasses are just some of the random products you see out there.

Maty was different, or at least it had a legitimate case to make as it specialized in fairly modest and accessible costumes, and I imagine for quite some time.  Plus you can only sell so many ballet shoes in a month.  You have to come up with something to boost sales.  And it seems to me that they had made the right choice.  Here is how things looked downstairs where the flamenco dresses hung. 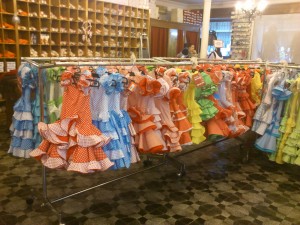 No, I didn’t ask the customers to move out of the way for the picture.  They just weren’t there.  But I will take the opportunity to tell you that the store is wonderfully old-style, with lots of room and, high ceilings and walls stocked to the top with products.

But I wasn’t here to see those things.  No was anyone else, apparently.  Here’s where the crowd was instead: 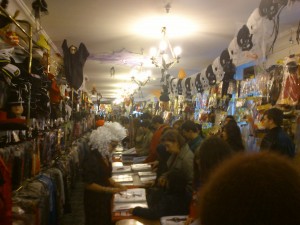 The place was jumping, as you can see, with customers of all ages clamoring for an outfit to suit their needs.  Children were nearly pinned to the counter.  All of us looked for solutions and quick, because the alternative was making it yourself.

I have to admit that the creative side of me wanted to eschew these easy-way-out costumes and try to confection my own get-ups for my daughters.  That was until I told them what I had in mind.  Then they suggested I get a MRI. They obviously had even littler faith.

It can be so tough to compete with those mothers who can whip up Hollywood-quality wardrobes with just a few things hanging around the house.  They say things like: “I just made this witch’s dress with a garbage bag.  I fashioned the hat from two milk cartons, and glued some kitty litter on to make the moons and the stars.   Looks like the real thing, doesn’t it?” or “I just did a workshop on how to make hanging eyeballs with a hardboiled egg and an unraveled condom.  Your father doesn’t need them very often, anyway, so he won’t mind.  It’s going look great.”

And it does, for the love of God.  It really does.  Had I attempted to do the same, I would have crafted something resembling a physical representation of Total Failure.  Defeat.  They wouldn’t have said it looked like a witch because there would be nothing in common with a great old hag at all.   This is artisanship fro crying out loud, and you are reading from a person who when he draws a pumpkin his students think he is depicting a

So I accept my limitations and that day resorted to studying the albums with pictures, prices and sizes of all the costumes.  I went to the book which featured versions for grown-ups and I flipped through pages and pages of costumes until it became apparent to me that fear and terror were the last things they were eliciting.  In fact, by the end, images of necrophilia danced in my head.  I thought to myself “Boy, what I could do with the zombie if I got enough caipirinhas in her…” and things like that until I realized it was time I focused on finding the right fangs for my daughter.  It was only fair.

Handing over the problem to a store does not mean you are necessarily going to get everything done in five minutes.  Halloween sales tend to bring a child’s power of decision down to a near standstill.   They become mesmerized by the whole picture and lose all focus.  That was what nearly happened to my daughters.  But once I was able to stop ogling photos of Little Red Riding Hood in a miniskirt with blood make-up dripping down the corners of her lips and a knife in her hand, we managed to figure out at least one of the choices.   We could move on.