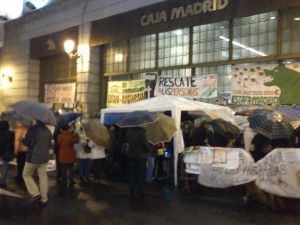 This is just off Arenal, right in front of the Maty costume store.  And right next to Caja Madrid.  Here you can sign petitions to stop the madness raging in Spain of late.

You see, the down side of going to any lengths to own a home is that when things get ugly, and they’ve gotten pretty grim over the past few years, holding onto that little parcel of your dreams can turn into a nightmare.  I will refrain from adopting too lighthearted an approach today, because there is little amusing or witty to tell.

Talk of the week in Spain has centered around the rampant evictions taking place all over the country, moved and promoted by the banks, the very same financial institutions the government and our tax money, as well as Germany’s and the rest of the European Union’s, has had to bail out before they went belly up.  That put us in a 200-billion-euro hole and now everyone has to do their part to keep the country from sinking and even possibly leaving the euro, something which will probably not happen, much to the disappointment of the British.  And now even we teachers are having to grin and bear it, this was unthinkable months ago, as they plan to cut out our Christmas bonus.  That’s the famous paga extra, which by the way, let’s get the facts straight, is not an extra paycheck the local authorities deliver out of the goodness of their hearts but rather one-fourteenth of our salary.  They aren’t canceling a bonus; they are reducing our annual income by 7.2%.

How have the banks shown their appreciation for such generosity and understanding despite their professional screw-ups?  By tossing thousands of families out onto the street for not having enough money to pay the mortgage.   Thanks guys.  God bless you.  Now everyone knows that some of these cases may have been the result of a particular person mismanaging their budget, but many are honest families who are now a part of the growing 25% non-workforce, and simply can’t keep up.  Where’s their bailout?  Where’s their rescue?   The forcible ousting has created immense tension, which sadly culminated in the tragic death this weekend of a 53-year-old woman in that Basque Country.  Hers is the second death due to these circumstances in three weeks.

To give you an idea of the seriousness of the situation, the main political parties have come together for once in their lives and are working to stop the evictions until a better and fairer system can be set up.  Some banks have already taken that initiative.  This may become effective as early as Monday.

That may spell miraculously good news for those poor people who are on the verge of losing their homes, but it will have come a little late for Amaia, not to mention for the 400,000 alreadyevicted homeowners since the crisis began.