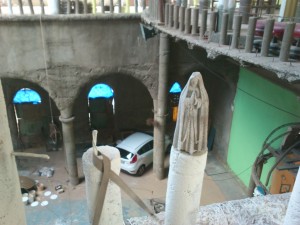 Certain things defy all logic.  In this case, there are about seven of them: 1) that there is a cathedral in a small suburban town called Mejorada del Campo being built nearly single-handedly by an amiable former monk named Justo Gallego; 2) that there is even a cathedral in Mejorada at all ; 3) that Justo has been working on it for over fifty years; 4) that he is 88 years old and still shows up every day to get a little more done; 5) that he is indisputably a great inspiration to those in search of spiritual strength and yet the Catholic Church refuses to recognize his efforts or his sacred temple; 6) that barely anyone goes by to see it;

The shameful thing is that I have been thinking about a seventh for ten minutes and have given up.  Justo has been methodically erecting this enormous temple since the early 1960s and acts and talks and moves and gestures and beams and seems as if he has no plan to depart from this world for another fifty.  That could constitute the final and most defiant fact of them all.  Time will tell; as will his death.

For the moment, however, good old Justo is still there.  I saw him the other day with my own eyes.  We hadn’t been there but two minutes when his frail, frugal frame emerged from an arched doorway, in a spry, yet, restricted gait that suggested age, yet, agelessness.

Yes, I saw him with my own eyes.  I saw his bright and watery aged eyes with my own eyes.  He was still as optimistic about his project as I remembered, although it had been two years since I had last been at the cathedral.  There have been changes.  Frescoes depicting the nativity story have been painted over the arches, though the church itself still has a ways to go before being completed.  The crypt has shown some progress.  There is a small altar where the main one which eventually be placed, if it is at all.  That was what I could remember.  But much still remains the same.  There must be doesn’t a details I have forgotten about.

Yes, here is a picture of its interior, taken from above.  Yes, that is a tiny statue of the Virgin Mary on the stump of a truncated miniature pillar, and yes, that’s a car parked in the nave below.  Don’t ask what make it is because I don’t know.  But that’s the kind of thing I expect to find in Justo’s cathedral.

A visit to this unique place, this is not my first post on the subject, is a renewal of the spirit to fight for what one believes in.  A renewal of the understanding of knowing how to do stick with that spirit without throwing one’s humility out the window. So approachable.

Some make fun of Justo and his apparently quixotic philosophy on life; while others admire him with a slight dose of envy laced with frustration and cynicism.  They claim the man could have finished it years ago, but hasn’t because he doesn’t want to, because when does, he won’t know what to do with his life.

That’s quite an analysis they come up with, I think to myself.  On behalf of myself.  In spite of myself.