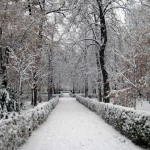 Ok, I admit it.  This is not Madrid this morning.  I have absolutely no imagination.  Every year on December 28th I use the old “It’s snowing in Madrid” trick to dupe the unwary on the Feast of the Holy Innocents.  To do this in English doesn’t quite garner the amusement it should as most people from beyond Spain’s border are not aware that this is this country’s equivalent of our April Fool’s Day.  It’s also not entirely impossible for it to snow at this time of the year, even in Madrid.  This happens to be a genuine caption of the Retiro Park from a fairly thick snowfall years ago.  So it’s pretty easy to pull a fast one on the rest of the world.

I didn’t quite expect to catch many people off guard here though.  Even my daughter who is down in Cádiz gave me the old, “Dad, please.  What do you think I am, stupid or something?”  Part of that has to do with the fact I think I say the same joke year in and year out.  But a few did take the bait.  One was my other half who is currently in a distant land which is habitually blanketed in snow at this time of year and rattled with cold and wind.  Right now she is telling half her country that we are buried in frozen precipitation.  Even my friends from a certain online magazine from this city contacted me to check on what part of Madrid I was referring to.  So maybe the old trick still has a little of its trickiness left in it.

Leave it to the Spanish to come with one of the most unusual historical events as a motive for sticking “Kick Me” signs on each other’s back.  December 28th, I think I have mentioned this before, I am sure I have mentioned this before, commemorates the massacre of all the children under the age of two in Bethlehem.  Herod knew the possible threat was a newborn, but for good measure, just in case he was off by about 730 days, took no chances.  The victims were later known as the Santos Inocentes, and from the idea of “innocent”, as in “gullible”, came the excuse for pulling a person’s leg.  It’s quite a road from mass infanticide to harmless pranks, but at some point, the transformation was made.

The doubly ironic point is that the event itself is the subject of enormous historical scrutiny, as many, if not most exports, cast serious doubt that it ever took place.  I certainly hope that is true.  It also wouldn’t be surprising, since, upon further consideration, one comes to the conclusion that many Spanish holidays are based on facts that seem anything but factual.  Here’s a sampling:

Saint James’ Day (July 25th) – Patron saint of regarded as the evangelizer of Spain, chances are he never set foot in this land.

Fiesta Nacional de España (October 12th) – By most Spaniards’ standard, the Feast of Our Lady of the Pillar.  This was the Virgin Mary who it said to have appeared before St. James during the journey through this land that he never made, making the event doubly miraculous.   She is also the patroness of Hispanic Culture and not Spain, as is commonly thought.  That is the Virgin of the Immaculate Conception; we’ll get to her in a second.

The most baffling part of all is that the one indisputable truth related to this day, the Discovery of America by a Spain-financed Columbus, is hardly ever mentioned.  People will say things like, “Oh, yeah, that’s true, too.”

“What do you mean that’s true too?!  You guys single-handedly ushered in the Modern Age and you celebrate the sketchy apparition of Mary before a man who was never here?”  Go figure.

The Immaculate Conception (December 8th) – The Patron Virgin Mary of Spain and known as such for a personal development that even the most devout Catholic struggles to come to terms with.

Father’s Day (March 19th) – In honor of St. Joseph, the father of the son he never sired, if we are to have faith in the December 8th thing.  Maybe the non-visit by St. James had sometthing to do with this.  In any event, that means we are admiring the man who taught the Son of God how to saw wood and wield a mallet before he moved on to other matters.

So I guess that the Day of the Innocents should not really come as a surprise.  The surprise is for those who forget what day it is.  One thing is for sure.  Expect snow for next December 28th.  Trust me!