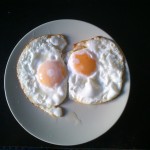 Fried Eggs.  Here are two of them.  A pair.  Un buen par, as they say inMadrid.  It never ceases to amaze me just how easy it is to make jokes with eggs inSpain.  “Huevos” (eggs in Spanish) are a slang term for testicles, the equivalent in English of “balls”, and God knows their use, of the words that is, contributes plenty of mirth to the Spaniards, almost on a daily basis.  Every time the word is employed, and I mean every time, even in its real sense, rare is the occasion that someone doesn’t slip across a sly comment or a furtive look.  And everyone laughs as if it’s the first time they have ever heard the reference.

Just today, just this very day, one colleague asked another if he had any sound effects for a play we are organizing and the other replied “un huevo” which literally means “an egg” but can be translated vulgarly as “a shitload”.  Actually he said, “I have an egg.”

And the other invariably replied, “You have just one egg,” suggesting that the other possessed just one testicle, not that he owned a lot of sound effects material.  To which the other replied with a chuckle:

“Oh, yeah,” returned the first in a cocky but friendly manner.  “That’s all I need.”  Meaning he was so manly he didn’t need two.  Then we all laughed, me included.

Now, this same exchange of witty remarks could have taken place five, ten, fifteen or even twenty years ago, and the results would have been the same.  And from what I can tell, the jokes will go on for decades to come.

Trust me, any Spaniard who sees this photo is going to think of reproductive organs before realizing that it’s just a plate of food.  The culture of the “huevo” lends itself to a lot of conversation. It’s a good thing to know should you ever engage in an extended stay here.

But, in addition to gonads, the dish itself is a cultural oddity.  To begin with, it is rarely breakfast food, unless you are a guest at one of those hotels where they serve those meals that so enamor tourists all over the world.  Even the Spanish, who normally eschew the massive calorie intake that has garnered fame for morning tables throughout the English-speaking world, have a soft spot for those acres of tables bulging with a sensuous spread of delectables.  In fact, I would be willing to bet that a not-so-insignificant number pay for the room mainly with the incentive of being able to wake up the next morning and immerse themselves in one of the greatest pleasure known to man: the breakfast buffet.

But limited to the restrictions of a Spanish diet in a Spanish home, don’t count on starting the day to a toast and an egg done easy over accompanied by cereal and a pot of hot coffee.  Just not gonna happen.

Fried eggs exist, by all means.  But expect them for lunch or even dinner.  My first came for supper, traditionally a light meal here.  I did raise and eyebrow the first time a plate was placed before me.  It was ten at night and I hadn’t quite prepared myself for the fare. I didn’t take long though.

Kids love and can pretty much go them at any time.  They are especially fond of them with chunks of paprika packed chorizo and bundles of oil soaked fries.  Does atrocities to your system, but there is no doubt that it’s top-notch comfort food.

Another surprise is how you make them.  You would think that they would adhere to the basic laws of eggdom; afterall, just how many ways can you fry an egg?  But, I can assure you that the technique is entirely different.  First of all, they don’t do the deed with butter, but rather you fill a small frying pan with a healthy layer of olive oil.  You heat up the oil and plop and egg into the middle.  And while it crackles away, you take a spoon and you flick drops of the hot oil on the top of the egg so that cooks on that side.  This is a very old technique. For proof, take a look at this famous painting by Velázquez.

There’s the woman; and there’s the fried egg adrift in a sea of oil.

The amount of liquid used to sizzle the egg has been reduced to less industrial quantities, but the essence of this Spanish technique is still true today, and it manages to extract a deliciously oily flavor which blends perfectly with the egg and a touch of salt.  The slightly bitter olive oil makes a huge difference.  You can reach for a loaf of baguette, rip off a chunk and poke at the yolk without fear.  The rest you should pretty much know what to do.

All you need is some huevos.  Of course, that joke is not funny at all…unless you are Spanish.