In fact roads and their peculiarities were beginning to engage me in a way I thought no asphalted network would.   After just a couple of days on the road, I was taking an interest in the lanes and their surroundings to such a degree that my daughters began to suggest that I either change the subject or leave the country all together.  But I couldn’t help coming to some general conclusions about English roads that went beyond just hedgerows and their fine trimming.

Hills; that was another one.  You know England isn’t precisely what you would call the Himalayas of Europe, I think its highest point, Scafell Pike, doesn’t even reach 1,000 meters, which is almost laughable by almost any human’s standards unless you live on an atoll.  Then again, Bear Mountain back in my home state of Connecticut marvels at a hardly staggering 700 meters.  It’s more of a lump than anything of geological prominence.  Here’s a picture.

That wooded boob on the right is it.  I was going to put an arrow, but I figure I would let you have some fun and try to locate it.  My goodness, that will sure cure your vertigo.

The heights on the British Isles tell another story.  Scafell Pike, modest in altitude itself, does have a way of imposing rather impressively. 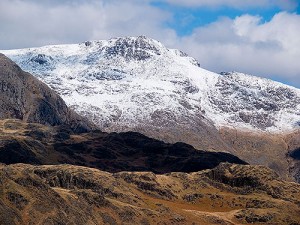 It may hardly surpass the mighty Connecticut range, but it certainly has managed to look like little other than a yeti could survive on its slopes.  And the English like that.  Here’s proof.

Aside from these pseudo-alpine landscapes, however, the rest of the England can be classified as hilly at best, wherever, of course, there are knolls and hillocks to back that up.

But the English sure know how to make the most of them, especially when it comes to designing a road.  The concept of shaving and flattening seems unbecoming of British civil engineers, as if by doing so they would be cheating.  You could imagine some grumpy Englishman grouse, “That’s what the bloody hill is there for!”

If the ascent has a gradient of 30º, well by God, who are we to ease it?  That results in some pretty punishing usage of the gearbox.  You can sail through towns in fourth, head into a climb as you depart, and scramble to downshift to 2nd before your vehicle starts to go backwards into the village bakery. There were moments when the ascent was so steep you could actually see the midday sun without looking up.  Luckily, rental car had maybe a thousand miles on it, so I figured I could do just about anything I wanted to the engine and it would survive the holiday.

Once you reach the top, on occasion you are treated to a new challenge in the form of a sign that reads “Warning: Blind Summit”, or something to that effect.  It’s usually capped by a large and imposing exclamation point.  There was no doubt that the British Road Network Agency meant business when it hammered the post into the ground, but I had some doubts about how to decipher it because I could clearly see the top approaching.  It didn’t seem very hidden to me, so I couldn’t understand what all the fuss was about.

What I hadn’t detected was the near vertical drop on the other side, turning the road into a makeshift rollercoaster plunge.  As your vehicle becomes airborne, you feel that the notice should have been worded differently.  Something, maybe, like “Hidden Cliff” would have more precisely foreshadowed my imminent predicament.  And as my two daughters and I yelped “Holy Shit!” in a variety of languages, I took a moment from the drastic descent to yearn for the softer lanes of New England.