According the Mayo Clinic, approximately 100,000 people are at any one time waiting for an organ donation.  6,775 Americans die every day, based on the 2008 statistics, so must be even closer to 7,000 by now.  That would suggest that within a fortnight, every one of those patients in need of an organ replacement would have at least a shot at a second chance in life.  But that clearly isn’t the case.  In fact, finding the dying individual who is both suited and willing to provide you with a spare kidney or liver is often a disparagingly fruitless task.  Here is organdonor.gov to confirm that reality:

While that may give the impression that more people are receiving transplants than are listed, this graph might help you get a better perspective of things. 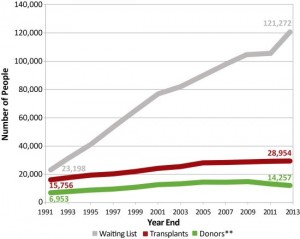 The gap isn’t just getting wider; it’s increased by whopping dimensions. While the number of transplants hasn’t even doubled in almost twenty-five years, the number of patients in need has shot more than fivefold.  So, America is far from exemplary in this sense, though there are some bright spots:

As you can see, you don’t need to have met your Maker to exert your generosity, and from a medical standpoint, living donors are generally preferable to deceased ones.  It’s generally a question of freshness.  Organs are extremely perishable.  Sadly, living donations are still a minority.  The reason is that many are just naturally reluctant to go ahead with it; and the reason for that in part has to do with an old nagging problem in the United States: insurance.  This act of goodwill might mean being turned down for private health insurance (7%) or life insurance (25%).  In some countries, giving a organ is compensated by free healthcare for you and your family for life.

Donations by deceased bodies is obviously understandably more common, but even then, support is far from widespread.  Hesitance is brought on by urban myths about evil doctors knowingly allowing a patient to die in order to get at those innards which are in such high demand in the lucrative organ donation market; or simply what is known as the “ick” factor, which is that natural distaste for tampering with dead organisms.  They all contribute to the lackluster response to this growing need.  In other words, everyone is all for the idea, as long as it’s someone else’s chest that’s being dissected.

To my surprise, and probably to that of every living Spaniard, Spain leads the world in organ donors, 35.5 generous souls per million forfeiting a chunk of their body for thy neighbor.  That, coupled with its top-notch, highly coordinated, organ bank network, make the system here a global model of efficiency and effectiveness.  Those are words the Spanish aren’t used to hearing those words mentioned regarding anything official.

Some say that, like many European countries, this has to do with the fact that all legal adults are automatically considered potential donors unless they officially indicate otherwise.  To do so is known as opting out.  It’s also believed that Spain, a Mediterranean country where kinship ties are often stronger, helping out a relative in any way is just a part of being “good to the family”.

In the United States, no one can carve out your liver without prior consent. It’s called opting in.  The moment of truth comes at a time when you are doing something entirely unrelated: confirming your personal details for the department of motor vehicles when you renew your license.  But I’ll tell you about that a little later.

The point is, kidneys, pancreases and lungs are scarce, but dead people aren’t.  That brings us to one of the most undeniably unenviable jobs in the world: cold calling for internal organs.  The fact that time is of essence, as the deteriorating tissue must be swept away and inserted in a desperate donee, makes the inappropriateness of the act that much more accentuated, but the immediacy of the action that much greater.  In short, the person who has been hired to perform this heinous task has to do so practically, as Dickens would delightfully put it, “when the body is still warm.”

And so it was, just five minutes after arriving home, with mom having to face the fact that her husband and companion of nearly 60 years would never return, and my sister trying to wash off the shock that had overcome her body, that I crashed out on the living room couch, to find comfort from being half-orphaned in the shelter of a baseball game.  The pitcher firing down the line methodically; the dull judgement of the umpire; the slow toss back to the mound by the catcher.  The pitch; the call; the toss.  Pitch, call, toss. Over and over like swinging under a maple tree.

It was then as I was saying, that the phone rang.  When this happens, the television has a feature that displays caller information. My mother and sister are not terribly technology literate, and they had never realized this exists nor did they ever understand how I could so accurately predict who was on the other end of the call without taking my eyes off a double-play.  That was neither here nor there, the thing was I saw the word “bank” and called to mom that the bank was calling and muttered something about the bastards getting wind of Dad dying before the day was out, and that they were just trying to freeze his account…all $47 of it.  Thank God I had taken out the other $50 just the day before.  They were heartless jack-asses.

Well, it turned out that heartless was what the phoners wanted my dad to be. Or liverless. Or kidneyless.  It was the New England Organ Bank  -I had neglected to pay enough attention to that key third word- and they were just checking to see if we had any intention of doing a good deed for a sick patient.  That’s what I figure they planned on saying but I don’t think my mother let them get halfway through their statement before she started revealing her feelings on the social etiquette of asking for someone’s insides when hardly an hour had gone by.  The association is the oldest of its kind in the country and probably used to that sort of response, and the urgency of the matter did require early contact.  But I feel confident when expressing a great deal of reservation regarding procedure.  Someone at the hospital should have brought this option to our attention when we were there, after all they seemed to have no qualms about letting the NEOB know about Dad passing away, and perhaps a greater time frame between terminal breath and renal request should be allowed for.  The caller made a few attempts to convince my mother, but they had no idea who they were dealing with.  Dad, at nearly 90, probably had little to offer, and I get the feeling he wouldn’t have agreed to it.  Otherwise he would have opted in years before.  The NEOB was trying to opt him in in death what he clearly had declined to do in life.

Mom hung up, preached to me, and rightly so, about the impropriety of requesting a gall bladder at that time of night, and I wholeheartedly agreed.  “Damn right, Mom!” At least for that night, Dad was going to stay in one piece.  She went on to repeat her astonishment, and I concurred for a second time…maybe a third.  Then we called it a night.  The Mets were pitching, now.  Pitch. Call. Toss. Pitch. Call. Toss.