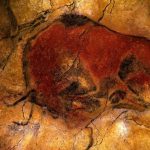 Episode 2 takes us to the neolithic period and the cave paintings of Altamira in Cantabria. Authentic masterpieces were made back then. Learn about how the cave was discovered, the difficulties they had at first convincing the scientific world, and what makes this site so special in this history of Spain and in Art History. Enjoy!

If there ever was a time a teacher of mine devoted an iota of their lesson plan to a bunch of stone age graffiti inside a dank cave in the north of Spain, it would have amounted to little more than an utterance before moving on to the other side of the Mediterranean where things were really hopping.  The Middle East, and more specifically Mesopotamia, was rather busy establishing what would end up being the bases of all of modern civilization.  A daunting task, to say the least, and it certainly kept their minds occupied.  Nowadays a region often maligned for being backward, in the dawn of ancient times, Mesopotamia and its peoples were at the head of the progress pack in almost every way.  Let’s see just a smattering of what our friends from Sumer, Babylonia, Assyria, Persia (and later Phoenicia and Egypt) would contribute to the betterment of mankind: agriculture, irrigation, metalworking, medicine, writing, engineering (including dams and large buildings), urban design, the wheel, coordinated transportation, arithmetic, accounting, banking, money, astronomy, and, of course, beer and winemaking.  And that’s just the important stuff.

So there was good reason for the teacher to focus our attention on developments there, but that doesn’t mean nothing was shaking in other parts of the Mare Nostrum; we just weren’t privy to it.  The Iberian Peninsula was quite active, if you want know, and even if you don’t, I’ll be telling you about it anyway.
Just what was it like back then?  Legend has it, and this seems to be confirmed rather fervently by wishful-thinking environmentalists, that the land was one lush forest.

So fraught with vegetation was the territory, according to the story handed down over the generations, that the classical Greek geographer, Strabo, was said to have claimed that a squirrel could cross the span of the land, from coast to coast, without ever having to touch the ground.   A shocking bit of news if you are in any shape or form familiar with the average landscape in this country, especially around the middle part.  Either the plains were really once that loaded with forests or the rodent was equipped with bionic legs.

There is, however, yet another explanation: it’s total bull.  Strabo never mentioned the animal, let alone its extraordinary feat.  That’s reason enough to cast doubt on the whole story.  Has deforestation taken its toll on the country over its three thousand years of history?  Why not.  My home state of Connecticut was nearly stripped naked in just two hundred before the forests began to come back, so there is no telling.

Chances are, though, the change was not as dramatic as some would like to believe.

While the red squirrel still exists in Spain, the Spaniards are fascinated by this little creature and can see packs (of people that is) following them all over Retiro Park, the tru boss by numbers is the one and only rabbit.  In fact, and this was a big revelation for me when I first heard about it, the very name of the country has its origins in this lupine creature.  Word has it, the Phoenicians, we’ll get back to them in a little while, were so bowled over the infinite number of bunnies hopping around that they name the land I-spn-ya (land of the rabbits).  I shit you not.  Some hardcore Spaniards question this theory through and through, feeling it isn’t dignified enough, especially when you consider the animal is also used in Spanish as a connotation for female genitalia, but it seems to be the story that holds up the best.

In addition to a ton of rodents of different sizes and shapes, there was also quite a bit of human activity.  Not necessarily the kind that erected 500ft pyramids or who laid down the foundations of the modern legal system, but they were certainly keeping themselves busy staying alive.  This was when I learned that there were lots of them. To simplify matters they came in two basic forms: the Celts and the Iberians.

My friend Pepe insisted that it was true.  “The even have their own bagpipe.”
Well, it turns out once again, that my old friend Pepe was telling the truth.  The bagpipe has existed in the northwest of Spain since the Middle Ages and probably made its way to the British Isles later.  Who would have guessed?  The same can be said of the Celts themselves.  Recent genetic studies show that many original Britons and Irish are closely tied  to the Celts from the Spain, DNA-wise,  and most likely came from that region when the fishermen sailed up to those parts around 6,000 years ago.  What do you know…that really must irritate the Brits to no end.  And that, of course, gives me a good laugh.

Anyway, as I was saying.  You had your Iberians and Celts and when they met, took a fancy to each other, and got drunk and horny, they produced Celt-Iberians.  But that was just the tip of the iceberg.  There were literally scores of tribes and nations roaming around the land.  Here is just a sampling:  you have your Vettones in Extramadura, your Vaccaei in the Salamanca area, your Lusitani in Portugal (that’s where they get the name of the ill-fated ship the Lusitania), the Carpetani in the middle of the land, the Oretani near Jaen, the Turdetani in Andalusia, the Astures in Asturias, the Vascones in the Basque Country (they have always been there), and so on.  There’s just no end to it.  Some were more advanced than others, but true progress wouldn’t come until the boys from the other side of the Mediterranean showed up.  Then things really started rolling…as we will see.

Speaking of medical centers, I pulled up to the Greenwich Hospital early that day, it wasn’t really a visit down Maternity Ward Memory Lane but rather a quest to see what had become of the old place over the years, and, if it had become the holistic temple that my mom suggested the evening before.  Would there be Indian music and candy-stripers draped in healing beads and things like that.

Driving towards the hospital did not trigger any childhood traumas like being stuck with a ten-inch needle, or having my shin bone cracked back into place.  I was a child of great fortune in this sense.  I had never really had to go there to be treated for anything too serious.   Never even spent the night.  The worst was a visit to the emergency room to have a bleeding toe cared for after I had walked into a knife that had been stuck in the ground in our backyard.  Allow me to explain.

There were a few summers when my brothers were shipped off to Indiana to a military summer camp called Culver.  Now, doesn’t that sound like the kind of fun you look for as a 12-year-old!  Reveille at dawn and Nazi-youth dressed counselors barking orders left and right.  I have never been there, I escaped forced labor somehow, but from what I hear the camp must have been a kind of place the weeds out the strong from the weak under the guise that you are having fun.  Those places unnerve me.

In all seriousness, their experience did not go without its benefits.  One brother had become quite an expert in Indian dances, which is just the kind of formative skill that in no way serves a youth from the New York Metropolitan area, but does make for thrilling summer evenings when life would otherwise be slow and uneventful.  For a time there, he was into building bonfires large enough to scorch the neighborhood and he would leap around them nimbly and even hop over one on occasion as long as the flames were high enough to snap at his gonads.

I have to hand it him, in that thick muggy August night air, and with the fire dancing around like feisty organ pipes, the whole effect was pretty impressive.  Oftentimes, to get something set up, we needed to aid of a knife, and being a bunch of numbskulls we would usually choose the one that boasted the biggest and sharpest blade.  Then we would stick it into the ground in John Wayne fashion, and forget about it as we raced around barefoot beneath the tricky dusk light.  And that, my friends, was the cause of it all.  It was my fault, mind you, and the scene, though not toe-threatening, did produce its fair share of bloodiness.  One of sisters took me to the hospital and made it through all right with a first-rate band-aid and bandage.  Not even a stitch.

And that was the beginning and end of my Greenwich Hospital experience as a child.

Though the hospital was in the same place as always, I could barely recognize it.  Really.  It had completely changed, resembling its former self only in that it shared the word “hospital” on the sign.  A look at the history of this institution is a kind of century-long chronological analysis of dissatisfaction.  You see, the Greenwich Hospital has been redone so many times over the past one hundred years, it’s hard to imagine a moment when someone wasn’t tearing down a wall or hammering in a nail.  And one gets the feeling that when the board members weren’t actually renovating, they were drawing up the blueprints for the upcoming refurbishment.

The Hospital was founded in1903 ina building called the Octagon House (we can reasonably imagine its shape), but not long after, it moved to a larger location up on Milbank Avenue in 1906, where it acted as the town’s medical center until a new hospital large enough to accommodate the town’s increasing population was constructed.  The new building was finished and functioning in 1916.  The new site was on Perryridge Road, where the hospital stands till this day.

It was then later expanded in 1930, 1932, 1934 and one more time in 1940, before they decided that it just wasn’t big enough and, apparently never would.  So, after a period of raising the necessary funds, a new building was completed in 1951.  A south wing was added to that in 1963.  Then a huge overhaul took place in 1978.  This was theGreenwichHospitalas I basically remember it; a cross-shaped edifice, white on the outside, clean and broad on the inside.  Just your standard, straightforward, classic 70s-looking-soap-opera-fashion hospital, if you know what I mean.   It was really big, and looked plenty modern to me…but that just shows you how little I know about major clinics.  It also proves how much I underestimated the board of directors’ will to outdo itself every five years.

In the early 90s it was determined yet again that the facilities were inadequate in both size and technology and that something had to be done about it.  They did two things:  one was to have the institution join the Yale-New Haven Health System.  This boosted its category from just to solid municipal hospital to a first-class medical center which covered most specialties and even offered classes.  We are talking about a whole different level altogether.

They also built.  Naturally.  It started in 1997.  This time, there were no add-ons, no expanding, no sprucing up.  They just pulled the whole thing down and basically started over.  I also wanted to see the results, even though it was ten years later.