More than an invasion, the arrival of the Muslims, popularly called the Moors in Spanish history, came about probably as a result of a number of circumstances that made it perfect for them to go in and take control of the Iberian Peninsula. Was it deceit? Betrayal? Ambition? A combination of the three? It’s not easy to know for sure, but scholars have got a pretty good idea of what might have happened. One thing is for sure, once they did appear, conquer and settle down, they were there for the long haul. This episode takes to when it all got started. Listen and enjoy! 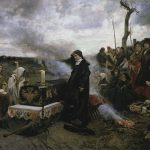 Juana I of Castile was the last sole monarch of the Castile, and she was the first to rule over Castile and Aragon (unofficially, Spain) in the history of the country. And yet, she barely governed and is really only famous for the name associated with her: Juana la Loca. Joanna the Mad. But was she really as insane as they say? Or was she the victim of relentless fake news from power-hungry family members around her? Check out this podcast and learn more.

You can subscribe to our podcasts on Spotify, Amazon and Castos. Or if you wish to support Brian’s Spain Domain, check us out at https://www.patreon.com/briansspaindomain

It’s the second part of our 2-part miniseries looking at the lives of the monarchs and their “special friends”. We started off mainly with the Habsburg dynasty, but now we are going to focus on the Bourbons. In this image we have Isabel II, faithfully fulfilling the Bourbon reputation for being faithless to their spouses while she enjoys the attention of several suitors. In Isabel’s case, some of her actions may have been justified by the fact her husband, Francisco de Asís, was almost assuredly homosexual. Learn about her situation and that of the rest of the dynasty all the way up to modern times. Enjoy!

You can subscribe to our podcasts on Spotify and Castos. Or if you wish to support Brian’s Spain Domain, check us out at https://www.patreon.com/briansspaindomain